Jake  has practiced Martial Arts since 1973, age 8. Starting with Judo, at a Brighton Judo club, called the Mid Sussex Judo Club, winning medals at championships. He received his Black belt in Judo from the world famous Joe Robinson at the Brighton Martial Art Centre in 1981.

Jake then studied Judo and various other martial arts until he discovered Grandmaster (Soke) Massaki Hatsumi Bujinkan Budo Tai-jutsu (Ninjutsu) from an Instructor in Brighton in 1989. He has trained constantly with the Bujinkan since, training every year with many top Shihan (Master instructors), from around the world and at most Tai-kai (international seminars run by Grandmaster Hatsumi) when they were taking place. 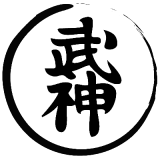 He first travelled to Japan in 1992, to train with Soke Hatsumi and the Japanese Shihan and has done so most years since. Jake says it is very important to train with the Grandmaster regularly as he is the source of our knowledge.

He was awarded his 5th Dan after taking the Sakki test administered by Soke Hatsumi and passing first time at the Madrid Taikai 2001.

Jake was awarded his 15th Dan in January 2014 and also the Bujinkan Gold medal award.

Jake is licenced to teach the following schools: